Remember George Bailey? He was my Aunt Joan's oldest brother. According to another brother, Homer, George remained aloof from the rest of the family after he returned from Africa in 1924.

He went on to marry at least twice and had at least five children. James Gordon Bailey, Sr, was one of his sons by Lillian Krull.

This article was published in the Bakersfield Californian soon after James' death:

Jim Bailey, also known as "Chum" or "Senior", to his son, family and friends passed away suddenly the afternoon of September 19, 2006. Jim was born the second of four children to George and Lillian Krull Bailey in Bakersfield, California. He graduated from Bakersfield High School and Cal Western Law School. In addition to being an Army Veteran, he was an accomplished real estate developer in central California.

In 1957 he purchased his first property, built, opened, and managed the Howdy House Restaurant. That building still exists today. Jim later developed and owned the Macon County Hofbrau, and the Way Station along with numerous other local properties in Bakersfield and Fresno. With his only son James Gordon Bailey, Jr. (Jim, Jr), as partner, he built the Bakersfield Hampton Inn, the Homewood Suites and J.G. Bailey Corporation a Multi Development Company located at 1500 Haggin Oaks Blvd. Jim was a proud and sober AA member since September 16, 1972. His children remember Dad or "Senior" as steadfastly committed to his children who he loved deeply and made it his life's work to provide for them. His children also remember vacations in Cayucos where Dad accidentally broke the limit on red snapper. He loved to hunt, fish and take long walks through the agriculture fields of the valley. He had a passion and enthusiasm for life and never gave up on something he believed in. His children will miss his "big fish" stories, his calls to say "just checking" and his encouragement to always dream big. His favorite songs were: "My Way" by Frank Sinatra," One Day at a Time Sweet Jesus" and "That's My Job" by Conway Twitty.

He was deeply devoted to his wife and her son. They spent the last years of his life traveling abroad in Canada, and Costa Rica where they own homes. He and his wife spent many wonderful times hunting fishing and traveling. Jim was a beloved husband and his wife will love and miss him always. He is preceded in death by his parents and two brothers George Edward Bailey, Jr and Melvin Douglas Bailey. "You'll Always be in our Heart. We'll Miss and Love you Forever" James Gordon Bailey Sr. June 28, 1940 – Sept. 19, 2006. 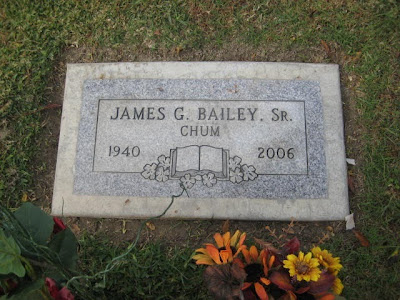 James G Bailey, Sr. Photo courtesy of Findagrave.com
The idea for this series came from Geneabloggers. ﻿
Posted by Schalene Dagutis at 5:00 AM