How I Got My Name

A few months ago, I read a blog on FamilySearch.org that intrigued me. It said you could tell your life story in 52 weeks by answering 52 questions. I decided not to participate mainly because the purpose of this blog isn't to write about me. I lead a pretty boring life and I'm totally fine with that. The purpose is to share the interesting tidbits of research I found during my genealogy process and to have things to talk about with Dad when we visit that will be of interest to him. He was the genealogist in the family for years.

This is my 100th Tangled Roots and Trees blog post, so in honor of that insignificant event, I will answer one of the questions from the suggested blog series, however. The question I'll answer is: What is your full name? Why did your parents give you that name? I get asked this frequently because I have an unusual name.

My full given name is Schalene Jennings.  I am my parents' oldest child and they were so sure I was going to be a boy, they had not even picked out a girl's name. Four days after I was born, I left the hospital without a first name. I was known as Baby Girl Jennings.  Eventually my parents settled on Schalene. I was named after my mother's mother. Her maiden name was Wilhelmina Schalin. Mom changed the spelling because she thought it would be easier to pronounce. 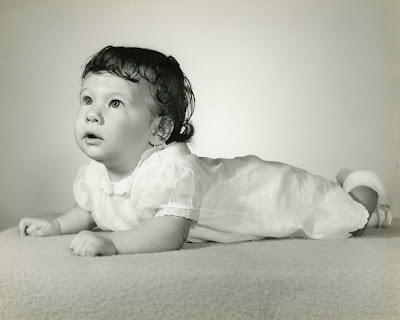 Schalene Jennings as an infant

After suffering through several first days of elementary school as a shy child when the teacher would mangle my name, I wish Mom would have spelled it Shuh-lean. But she didn't. I have been called Shea-lean, Scale-lean, Char-lean, and many other mispronunciations I can't remember.

My parents didn't give me a middle name. They thought Jennings would become my middle name when I married. I think my parents started to despair of that ever happening, but I did eventually marry two months before my 30th birthday to someone with a Lithuanian last name. So now I am the proud "owner" of two unusual names.

The funniest story about my married name: One day I called the passport office. The woman on the phone told me I spoke excellent English for a foreigner and was very surprised to learn I was native born!
Posted by Schalene Dagutis at 5:04 AM

Email ThisBlogThis!Share to TwitterShare to FacebookShare to Pinterest
Labels: Jennings