The Illustrated History of Nebraska, History of Nebraska from the Earliest Explorations to the Present time with Portraits, Maps and Tables, Volume III,  by Albert Watkins, PhD, and published in 1913 was another fabulous find on Google Play. I found a biographical sketch of an Amsberry ancestor, who was mover-and-shaker in Custer County, Nebraska. 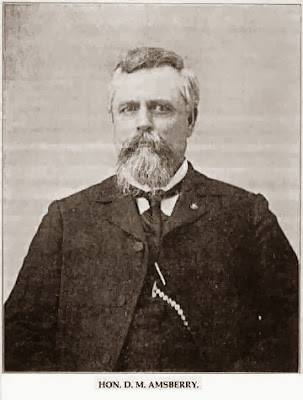 Darius Matthew Amsberry, educator, editor, and receiver of the United States land office, Broken Bow, was born in Marion County, Iowa, near the town of Knoxville September 10, 1851. His paternal great grandfather came from England to America. His grandfather, William Amsberry, was a native of New York, removed to Mason County, West Virginia, married Polly Everett, and during the Mexican War served in the United States Army. One of his children was William F. Amsberry, born in Mason County, West Virginia, in 1821. In 1847 he settled in Marion County, Iowa, talking up a homestead near Pella on the Des Moines river, and married Harriet A. Brown, born in West Virginia. Her father was of Irish descent and her mother of the Kimberling family of England. For some years William F. Amsberry was engaged in the sawmill and lumber business at Coalport, Iowa, and from that place moved to Nebraska in 1879, and became the owner of 320 acres in the Muddy valley, Custer county. He died in 1886 and his wife died at their Nebraska home in 1895. They had reared a family of seven children, one of whom is Darius M. Amsberry.

Until the latter was sixteen years old, he attended the public schools of Iowa, and for three years attended the Central University. In February 1874, he became a settler in Hall County, Nebraska. He taught school in all for sixty-four terms, forty-nine of which were spent in Nebraska. For six years he was superintendent of schools for Custer county. As county superintendent of schools he organized 170 school districts. He held the first teachers' institute in the county in a mill building, which was not completed, at Westerville, in April 1882, and in 1883, the institute was held at Broken Bow. The first institute was of three days duration, the second of one week, and the next was organized as a normal institute and lasted six weeks. These institutes established by Mr. Amsberry have since been continued by his successors.

For twenty-three years, he has been editor and publisher of the Broken Bow Republican. He also served for some years as justice of the peace in Custer county. Mr. Amsberry is a member of the Masonic order, the Ancient Order of United Workmen, the Modern Brotherhood of America, the Royal Highlanders, and the Nebraska Press Association, and he has held office in all of them. He has been chosen a deacon in the Baptist church for more than a quarter of a century, and vice president of the Nebraska Baptist state convention for four years, and is vice president of the board of trustees of the Grand Island Baptist College. 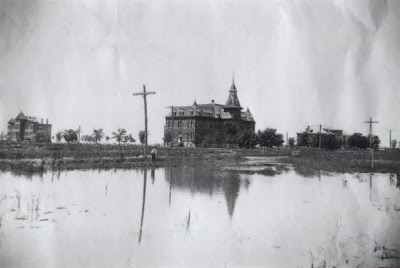 Grand Island Baptist College circa 1910. Photograph courtesy of the JournalStar.com

He was married April 8, 1875, to Evaline Greenlee of Corydon, Iowa, and six children have been born to them: Minnie M. Clay, wife of J. W. Clay; Lorin W.; Anna R. Foote, wife of Carl Foote; Lillie H.; and Jessie, the latter dying in infancy. Minnie and Anna are graduates of the Broken Bow high school and were school teachers before their marriage. William, the eldest son, is an agent of the Adams Express Company at Deadwood, South Dakota. Lorin W. is a printer and pressman, and Lillie H. is attending school at the Grand Island Baptist College.
Posted by Schalene Dagutis at 6:08 AM