A Soddy, or Soddie, is somone who lived in house built of sod, usually the early settlers of the Great Plains states. Several of my Beard ancestors settled in Custer County, Nebraska, in the late 1880s. Many of them lived in sod houses when they first homesteaded land.

I first found this photograph on Ancestry.com. I believe it is very unusual for the time as the family typically went to the photographer instead of the other way around. It is a photograph of the Perry Marvin Dady family in their parlor. 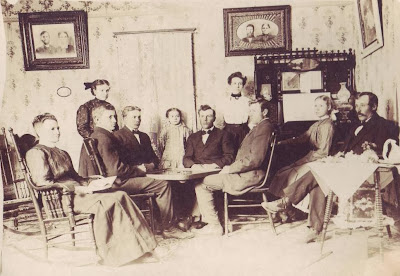 A few weeks later, on Google Play, I found a book with the unwieldy title, "History of Custer County, Nebraska: a Narrative of the Past with Special Emphasis upon the Pioneer Period of the County's History, Its Social, Commercial, Educational, Religious, and Civic Development from the Early Days to the present time," by W L Gaston and A R Humphrey. It was published in 1919. It included a biographical sketch of Perry Marvin Dady:

Perry M Dady whose residence in Custer county covers a period of more than thirty-six years, is now classed among the well-to-do men of the Mason City community. This fact shows him to be another one of Custer county’s agriculturalists who in their careers have exemplified with force the true western spirit of self-made manhood, for when he came to this state in 1882 his worldly possessions amounted to next to nothing and throughout his career he has been called upon to depend wholly upon his own abilities and energies.

Mr. Dady was born on a farm in Mason county, Illinois, March 9, 1859, and is a son of Spencer and Adelaide (Wible) Dady. His father, a native of Pennsylvania, was born in 1835, and as a young man went to Mason county, Illinois, where he started life without assets save those represented by his inherent qualities, and where he gained some small success. He there married Adelaide Wible, who was born in Illinois in 1840, and several years later they moved to Iowa, where Mr. Dady became the owner of a farm.


Perry M Dady received his education in the public schools of Illinois and Iowa, and was reared to farming, a vocation which he adopted for his life work. He was twenty-three years old when he came to Custer county in 1882, and pre-empted a homestead, which forms a part of his present farm. At that time the property was destitute of improvements of any kind, and Mr. Dady lived at first in a dug-out and later in a “soddy,” experiencing at the same time all other inconveniences and hardships which the early settlers were called upon to face. As the years passed, however, he began to secure  results from his hard labor, he added to his equipment and gradually began to erect buildings, of which he now has the full set, modern, well-constructed, attractive and in perfect repair. In every way his property shows the presence of industry and good management . Mr. Dady carries on general farming and raises thoroughbred Red Polled cattle and Poland-China hogs. He has been successful in both departments of his farm enterprise. He has accumulated 440 acres of valuable land and in so doing has at all times maintained his reputation as a man of sterling integrity and business straightforwardness. 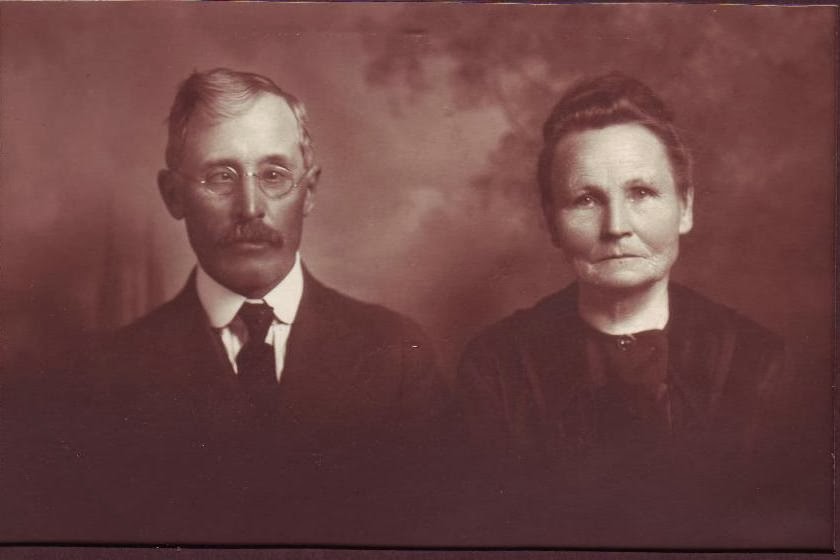 In 1882 Mr. Dady was united in marriage to Miss Ellen J Beard, who was born in Marion county, Iowa, a daughter of Adam Beard, who died while serving as a Union soldier during the Civil War. Mr. and Mrs. Dady are the parents of eight children: Perl S, who has a claim in the sand hills of Cherry county, Nebraska; Jennie, who is the wife of Oscar Ruyan, a clerk in Mason City, Nebraska; Otis M, who assists his father in operating part of the home farm; Guy W, who is in the national army and in service in France at the time of this writing; and Monna R, Harry L, Myrtle G, and Lorene J, who are all residing with their parents. The family belongs to the Baptist church, which they attend in Mason City. Mr. Dady maintains an independent stand as to political questions,  and has not been an active politician, although on several occasions he has served efficiently in the capacity of town clerk.

I love finding these old books online. I learn so many interesting things about the early years of our Nation and I love the writing style, so much more florid than today.
Posted by Schalene Dagutis at 4:14 AM