Out of Africa: The Hippopotamus Hunt

Homer Bailey went to Kenya, then known as British East Africa, with his missionary parents in 1920 and returned as a missionary years later with his own family. Near the end of his life, he wrote an autobiography of sorts that to my knowledge was never published. I was lucky enough to track down a copy several months ago.  This is the story of hunting hippopotamus, which was not a sport at the time. People used many parts of the animal for daily living as well as for food.

During the dark of night we found our way to a landing on Lake Victoria. We found it necessary to wait for our boatmen as they had not arrived. It was a miserable wait; the place was inhabited by a million or so mosquitoes. The boatmen were members of the Joluo tribe and we could not understand their language. Our host spoke Swahili, so we communicated to the others through him.

Following the leader, we trudged, at times stumbling, along a narrow root-obstructed path until we finally emerged at the waterfront. We were led to a boat and we all climbed into a large log-type of canoe. The boatmen pushed off and they paddled their way out about a hundred yards. They dropped whatever they used as an anchor over the side and we waited in silence until dawn.

Quite early that morning we noticed our seats were placed very low down in the water, obviously for stability. We could see places where repairs had been made to some damaged areas. It was from these stitches, that water was seeping into our craft, creeping higher. To keep our posteriors dry, some of us found it necessary to man the pumps. These pumps turned out to be half sections of dried gourd.

Four men worked the paddles -- two in front, two aft. Not a ripple marred the mirror-smooth surface of the lake as far as the eye could see. We had raisin bread for lunch and shared it with the Joluo boatmen. It was rather amusing to see them stealthily slip the raisins out and over the side of the canoe. Apparently they had never before seen such large bugs or insects in the bread. 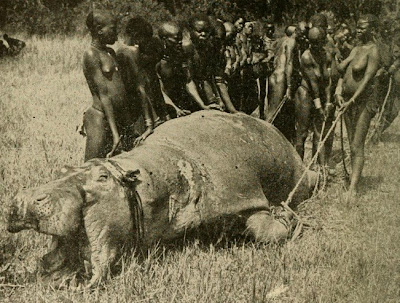 The sun had begun its descent when we spotted what could be a hippopotamus.  As quietly as possible, we floated forward. All that was visible were two widely space eyes. As we floated nearer we could see an inch or so of the head. By this time we were convinced that it was indeed a big hippopotamus and it seemed to be keeping us under surveillance trying to figure out if we were friend of foe. Should it make up its mind too early, it could easily submerge and move away.

Try to imagine a target of perhaps an inch some fifty yards away. If you shoot low, the water will cause the bullet to deflect. Should your aim be high, you will have lost your opportunity. It is no small trick in a canoe with such a small target. You have just one chance or it is gone for good.

The guns blazed away, shattering the still, quiet afternoon. The object out in the lake suddenly submerged. But that is really too mild a term for the waters boiled up all muddy as the colossus thrashed about. For several minutes the activity was furious. Gradually the furious struggling ceased, the muddy waters became calm. 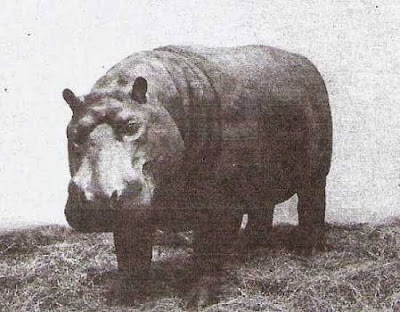 In an old log canoe, far from new, one would hardly want to be over the place where an angry hippo came to the surface. It seemed best to stay well back for awhile and let the animal make the next move. I cannot say exactly how long we waited but eventually that great big old water hog came up before our eyes, feet first. A cheer rang out from all onboard the canoe. The paddles now really went to work. We came along side of this immense thing. One of the men took out his knife, making an opening to which we could tie a tow line. Having secured the line to our canoe, we turned about for the trip back to the landing. A very slow trip it was.

Back at the shore, we were met by a veritable throng of local citizens. Word had got out fast. This good fortune could only result in a great feed for one and all. Without a moment's delay, they all waded in and we soon had that one-ton monster on land. Knives, handmade, long, short sharp or dull, were carving that porker. I kept wondering if someone might get hurt -- there were a lot of knives. It was a free for all. I was surprised to see some of the people eating the pork on the spot, raw. Now to me that was just a bit too rare.

It turned out to have been quite a day, the day we got our hippopotamus and fed the village.