Google Play is a wonderful application for genealogists and family history enthusiastists. As part of my research process, I Google the name of the ancestor I am researching and where they lived.  As a result, I am the owner of a free e-book entitled, "Pioneer History of Custer County and Short Sketches of Early Days in Nebraska," by S. D. Butcher, published in 1901.  The book describes the history of most of the towns and villages in Custer County and includes several vignettes about tragedies and other happenings.

My second cousin four times removed, Lucy Caroline Beard (1827-1915) and her husband, Francis Everett Amsberry (1824-1897) traveled from Mason County, West Virginia, to Custer County, Nebraska, in 1885 with most of their 12 children. 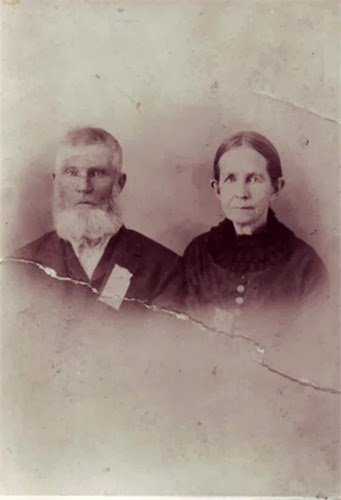 They settled in the vicinity of Mason City and family then spread mainly to the Broken Bow and Ansley areas of the county.  So naturally, I started reading that section of the book first. This story made me laugh out loud.

Custer County was formed in 1877 and was named after General George Armstrong Custer. The Mason City townsite was located by the Lincoln Land Company in 1886. Ansley was founded the same year. Broken Bow was platted in 1882.

Mason City, Nebraska circa 1901; Mason City is about 20 miles southeast of Broken Bow

The first settlers between the towns of Broken Bow, Merna, and Callaway were men by the name of Ream and Jeffords. To show the innocence and inexperience of these two bachelors, who came to this county in a farm wagon which contained all their possessions and which was drawn by a yoke of oxen, we will tell a little story at their expense. 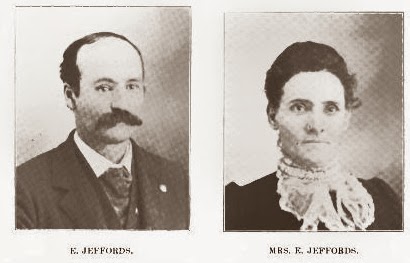 Jeffords and his wife, who he met and married after this story

As they began to leave the settlements on their journey west into the wilderness, they thought it would be a fine thing to have fresh eggs during the summer in their new home. In order to be able to enjoy such a luxury, they struck a bargain with a thrifty housewife for a dozen fine young chickens. The flock was shortly increased by the addition of six hens which they got at an astonishing bargain from another housewife along the way.

When they arrived near the present site of Broken Bow, they camped with Wilson Hewitt as that kind and accommodating pioneer invited the wayfarers to make their headquarters there until they got their claims located.

The men turned their chickens loose that night before retiring. The next morning they invited Mrs. Hewitt out to inspect the flock. She looked them over with the eye of an experienced housewife and then fell into such a fit of laughter that the boys thought she had gone crazy. When she recovered her composure, she informed the young poultry fanciers that their flock consisted of eleven young roosters, one pullet and six old hens that had probably come over in Noah's ark and had long passed the time to be considered useful layers.
Posted by Schalene Dagutis at 4:58 AM